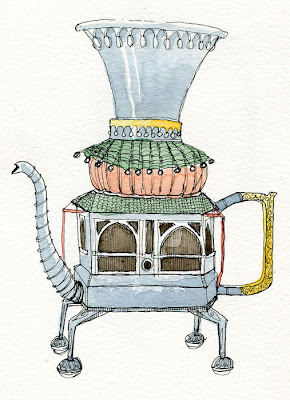 I found this baby while on a recent holiday in Kent. It's not a British construction at all but was manufactured in Bombay (now Mumbai of course) in around 1810 by a company owned by Sir Abraham Roberts (no relation) who was a colonel in the East India Company at around that time (obvioulsy a bit of a side-line). Bombay at this time suffered from poor water (a piped supply was introduced in 1860) and so Sir Abraham thought that he would build a construction that would catch it's own water supply (hence the odd funnel shaped structure on the top) and he intended these to be produced as housing for those Brits who couldn't funtion in the summer heat of Bombay and who headed for the much cooler hill stations in the Himalayas (probably Shimla). There are suggestions that Sir Abraham put his own money into this venture as he understood that Arthur Wellesley (later the Duke of Wellington) was interested in such a structure as he was known to suffer fron chronic diarrhoea brought on, it is thought, by the poor water in Bombay. It is not known whether the Duke of Wellington bought such a structure but they were manufactured in large numbers and this one was obvioulsy ultimately owned by a very wealthy family as it was transported form India to the UK at some time in it's life!
I have shown the structure from the rear as I particularly like the beautiful rear windows which offer the occupants a lovely view. You can just imagine the views from them when housed up in the Himalayan mountains......
Posted by John Roberts at Tuesday, October 05, 2010 2 comments: