I was recently booked to work for Samsung for four days at an event in Dubai and I thought I'd force myself to keep some sort of visual diary of the trip. With this in mind I spent some time at the airport (who doesn't these days when flying!) and did these two drawings: 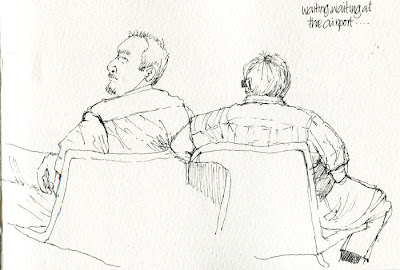 I suspect that the pen I was using was too fine. Anyway, here's another one: 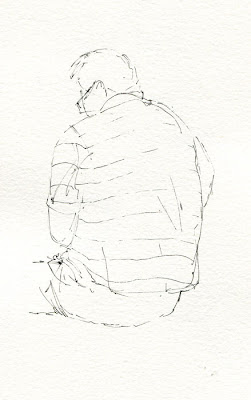 I eventually arrived at my destination and got to my hotel. Now, because of a breakdown in communication with the client I unfortunately spent most of the next day in my hotel room but I very quickly learnt to have a rather loving relationship with the air conditioning system. So much so that I sat in that room and drew it so that you could see the a/c vents!! The air vents are clearly visible at the upper reaches of the far wall - I found them unnaturally attractive by the end of my visit even if they were rather noisy..... 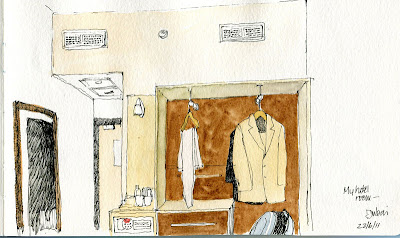 I should point out at this stage that the midday temperature outside the hotel was about 45 degrees C and so it was with great trepidation that I made my way to the top of the hotel and stand (in a shaded viewing platform) to draw the Dubai skyline. It's a very complex view with a hotch potch of small buildings shoved into any available space. I just concentrated on the the main buildings.....

The large sail-like building in the distance is the Burj Al Arab hotel which is a 7 star establishment and I was informed by the taxi driver that they won't even let you in unless you have a reservation there!!

The final drawing I'm going to share is the inside view I had of the Airbus 380 which I've never flown on before. A rather large plane with rows of three window seats either side of a central row of 4 seats (10 seats per plane row) and, after watching all the movies I fancied I started to draw this image just as turbulance struck the aircraft.... you'll notice that I ommitted the window seats on my right hand side as I was starting to suffer from exhaustion after my four days of working!

Not a breathtaking series of images I agree but my excuse is that I WAS on a working trip and it was just far to hot to wonder around the place!
Posted by John Roberts at Monday, June 27, 2011 No comments:

I discovered this pot house on a recent visit to Austria. We actually flew to Zurich and so I was expecting to find a number of teapots in Switzerland but we only stayed there overnight so really there wasn't much opportunity to explore. We discovered the pot below in one of the many beautifull valleys just over the Swiss border in Austria. It dates back to around 1810 and was manufactured in Vienna (by a company set up by an Scottish entrepreneur in 1784) and was well known for their elaboratey decorated and delicate looking handles and spouts. The drawback to this design was that the living quarters were quite small (a major drawback to the large Austrian families at the time) but the tea volume was vast. These pots became the forerunners of modern cafes as they produced/held more tea than any family would need and so travellers/villagers would be able to drink (at a price) the excess beverage.
Many pots of this time were personalised and this one had the following engraved over the door:
"Welcome here to all Malcolmtents for this Be a Holmes for all".
Cryptic, but this is a translation from the old Austrian text! 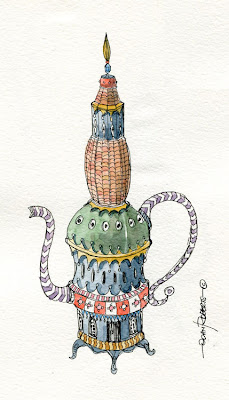 This little beauty was found nestling in a little coastal village somewhere on the Lleyn penninsular (in North Wales for those not in the know) and was in excellent condition. I mention its condition because normally these teapot houses were rendered in pebble-dash which, rather than protect the surface, corroded them! There was also a tendancy to strip out it's innards to install the dreaded kitchenette but luckily this doesn't seem to have happened here....
The pot house dates back from about 1825 and was manufactured in the the South Wales - probably Port Talbot and became very popular almost immedialtely. They were particulary favoured due to the very delicate and yet very strong spout and handle. The spout had a new design (quite revolutionary in its day) which meant that it didn't have the dreaded drip running down the outside of the spout when pouring. The metal casing had a high copper content which was said to explain why this particular model had exellent tea-making characteristics and the internal dimensions allowed for a substantial amount of living space as well as tea volume. 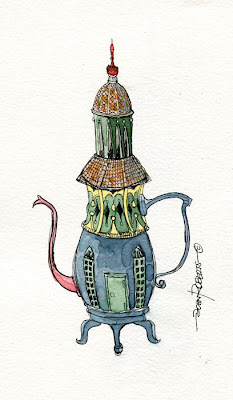